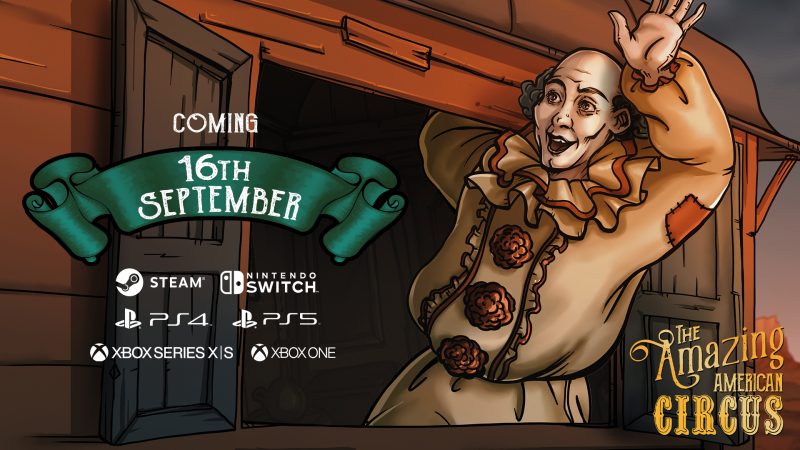 WARSAW, POLAND – July 13, 2021 – Klabater is pleased to announce that The Amazing American Circus – a unique deck-building game with sim elements, will hit PC and consoles on September 16 this year.

“In May, we conducted very extensive tests of our project. We took advantage of the possibility of closed tests, during which we invited selected representatives of the media and influencers who, together with over 300 backers from Kickstarter, tested The Amazing American Circus’ gameplay. Then, in mid-May, during the “Klabater Publisher Sale” we organized with the STEAM platform, nearly 1000 players from all over the world got the chance to try out the game. In June, after the tests were concluded, we gathered a lot of priceless feedback, opinions, and materials, nearly all of which have already been implemented in the final version of the game. Unfortunately, all changes require time, and so we’ve decided to push the date of the release a little further, from August 12 to September 16. Thanks to this we’ll not only improve the gameplay, but we’ll also get the chance to promote and show the game at the Gamescom in Cologne and PAX West in Seattle events. I hope that the game’s community understands and accepts this decision and will wait those few extra weeks for The Amazing American Circus.” – said Michał Gembicki, Join-CEO at Klabater

The Amazing American Circus will be released on September 16, 2021, on PC, PlayStation 4/5, Nintendo Switch, Xbox One, and Xbox Series X. More information:

The game will debut on PC and consoles at the price of 19.99 USD/EUR for the basic version and 29.99 USD/EUR for the Ringmaster’s Edition containing, among others, country-folk OST and a set of digital extras, including a stunning cookbook and a lorebook.