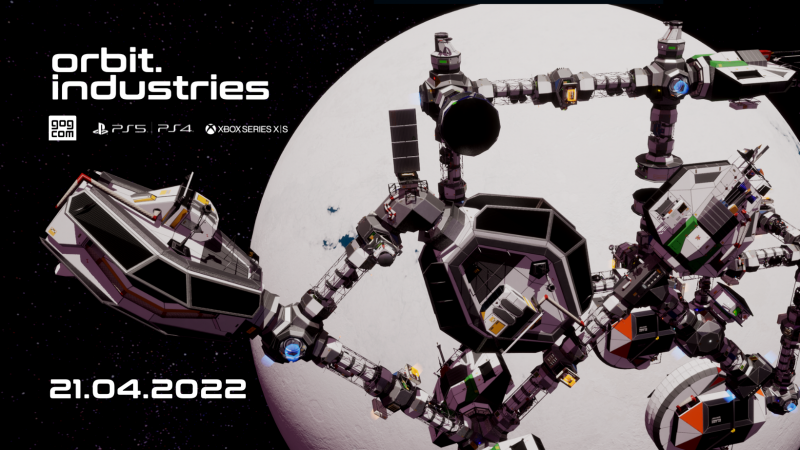 Warsaw, Poland | April 21st, 2022 – Klabater is thrilled to announce that ORBIT.INDUSTRIES IS OUT TODAY ON ALL MAJOR PLATFORMS! Build, Manage and Prosper in the orbit of alien worlds on the fringes of explored space. Construct and maintain the most efficient space station you possibly can, or build a space engineering marvel and enjoy the view – the choice is yours! And for those attending PAX East 2022 in Boston, you can play the game on the show floor at booth 15019.

orbit.industries is available on PC, PlayStation 4/5, Xbox One, Xbox Series X|S and Nintendo Switch at $19.99, EUR 19.99 and other regional equivalents, with a 10% launch week discount for PC and Xbox players!

orbit.industries is a strategic space station building game created by space enthusiasts, for space enthusiasts. Take in your orbital creations in 360 degrees, zooming in and out to marvel at your work. Look at the magnificent in-game star constellations, nebulas, and planets, made possible by Unreal Engine 4. Jump into 3 modes: Campaign with missions set in the orbit of far flung alien worlds, Endless mode where resources are limited but time is not, or Creative mode where you can let your imagination run wild in the orbital sandbox with no constraints. Orbit.industries blends inspiration from classic science fiction literature, movies, and popular space-opera TV series with actual knowledge and progress achieved in the field of space exploration, space engineering, and orbital stations development. Monitor and set up production cycles, resources, and their distribution. Focus either on efficiency or yield, harnessing and developing your skills as a master planner and manager. An abstract, 2D layout system resembling a circuit board to help you design the best connections, nooks, and crannies. A unique economic system provides you with a key objective – make your station efficient and profitable or fail! The normal route of business can be disrupted by a number of disruptions. From hacker attacks to errors and malfunctions each module and its system entail in your management of the station. There are 3 distinct campaign missions where you need to terraform a given planet, make it habitable, and easy to extract resources from. Built with a background narrative, each of these missions enables you to focus on the two-game modes in order to build your station in such a way as to successfully fulfill its objectives.

Are you going to be the most efficient, the most industrious, or build a station to match the breathtakingly beautiful view of the cosmos? Anything goes as long as the mission is successful!