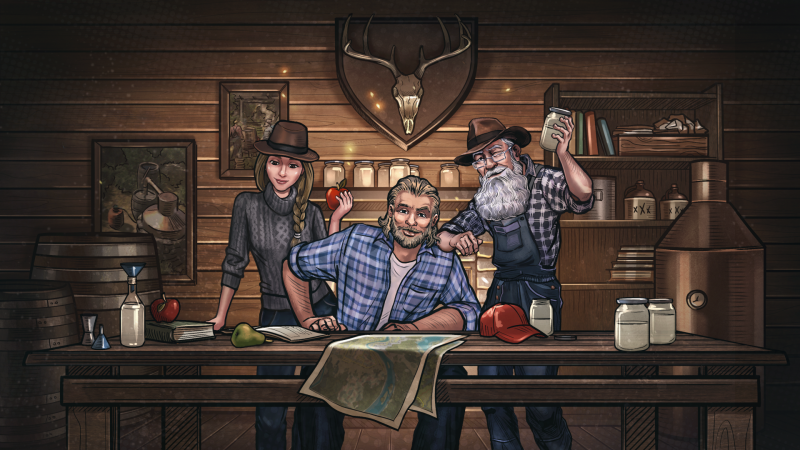 Warsaw, Poland | January 20th, 2023 – Moonshine Inc., the recently released moonshining simulator, is getting two major expansion updates anticipated by the community, in February. What is more, Klabater announces that they started working on porting the game console platforms.

Moonshine Inc.’s reception on Steam was satisfactory, however, the first mixed reviews showed that a longer tail for development works is necessary. For the past two months, the Klabater development team interacted lively with its Discord community and based on their feedback, worked hard on fixing, balancing, and improving the game.

The major issues connected to loading the save system were fixed in the first 1,5 weeks, along with the game mechanic problems. It also turned out, the game’s entry threshold at the release was overhigh for the moonshining amateurs not familiar with the alcohol production processes.

To date, Klabater released six patches, and the most recent ones included mostly new features, and improvements. The recent mostly positive reviews prove that the balancing and fixing were appreciated by the community and actually made the game experience better.

The major gameplay enhancements are planned for February 2nd and February 23rd when Klabater is expecting to release patches with completely new Police Quests and the most anticipated Sandbox Mode.

The Police Quests will be a special type of Side Quest which will serve the purpose of reducing the Global Alert Level and Stash Alert Level. They will vary from the Side Quests by their spawn points and spawn conditions and will be given by the Sheriff. An example of one quest could be getting a call from your godmother who is hosting the Sheriff at her place – in your name she negotiated turning his eye blind on you in return for his favorite rare likker.

The Sandbox Mode will give the players freedom of exploration and production. It will remove Main Missions and allow players to modify their gameplay. The technologies, side quests, police quests, and events will not be region locked anymore. In the inventory and the Fast Apparatus Placement windows, players will have the ability to discard unwanted batches and apparatuses. All the maps will be fully accessible to the player at all times. Depending on the base chosen to start with, all deliveries will start from there. All stashes will be open from the get-go.

Additionally, the Sandbox will give options effects. The player will be able to unlock most of the game features: the highest level of the buildings (Headquarters, Garage, Workshop), instant deliveries, all technologies, unlimited money, instant craft, fermentation, and distillation, or speed multiplier for crafting, and finally, deactivation of all Alert Levels and Game Over.

Klabater, as a studio, works within three areas – game development, game publishing, and porting to console platforms. The respective teams specialize within the pillars. While Moonshine Inc. developers are working on further game expansions, balancing, and fixes, the porting team is adapting the PC version to consoles. The console release versions will include all the PC updates to date. “The first steps of the typical porting works have been undertaken and we can confirm our primary plan of delivering the game to console platforms in 2023” – says Robert Wesołowski, Klabater CEO and game producer. “If you’re a game developer, note that you can always pitch your game to us – we’re actively looking to expand our portfolio of games and have all resources required to do so”.

“Definitely, we managed to build the authority of Moonshine Inc. as a game for moonshiners. If you search the browser for the phrase ‘game for moonshiners’, you first get a redirection to our Steam game page and then a series of YouTube videos from the players and influencers” – says Justyna Urbańska, Marketing & PR Manager at Klabater. “A total of 265 videos and Twitch streams were published to date and our team is continuously working on getting more coverage from content creators”.

During the launch, the developer’s live-steam was the fourth best-viewed stream on Steam, with 8 716 unique viewers (4 174 simultaneously at peak). On the first day, it was viewed by more than 120k more Steam users.

US and German players turned out to be the most interested in the game – the two markets represent as much as 50% share in total sales.

On December 6th, the dev team was hosting a recorded AMA session on Reddit. The thread was highly upvoted (83%) and viewed 541k times. You can review it on Reddit or watch the team answering on the recorded video on YouTube.

Klabater established their first cooperation with YouTuber Cyrus, an owner of Still’n The Clear channels dedicated to moonshining beginners. It started with a video presentation of the game by Moonshine Inc.’s producer Robert Wesołowski, followed by an advertorial in “The Mash” newsletter. Next week, Cyrus will also interview Robert on his podcast – follow it on Spotify to get a notification.