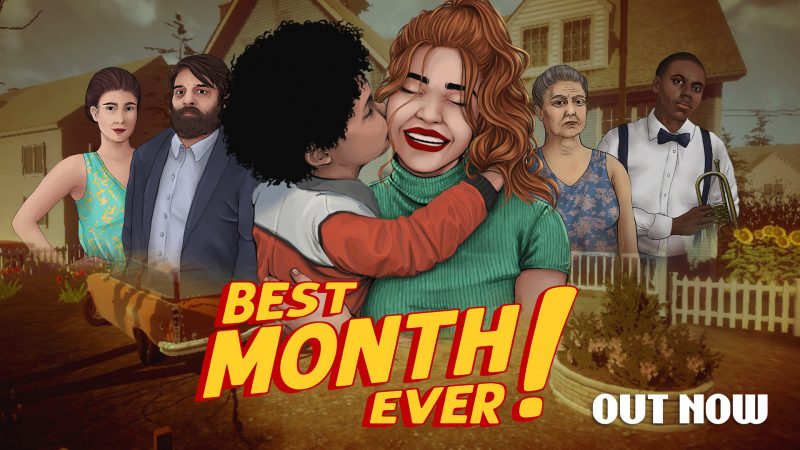 A bittersweet roller coaster through the tragic and magical moments of motherhood gets on the road today with an all-new release trailer after its successful PAX East ‘22 showcase!

Warsaw, Poland | May 5th, 2022 – Klabater is excited to announce that Best Month Ever! IS OUT NOW ON XBOX, PC and NINTENDO SWITCH. A bittersweet narrative point and click adventure game where you only have one month to live and must raise your son before you die. The choices you make matter as you swap between playing a mother called Louise in the 1960s and her son Mitch in the 1970s where you get to see how your choices changed his life.

With the new trailer focusing on what parenthood means, the game underlines all the sacrifices needed to be made in order to keep going in the face of adversity in a timely celebration in the run-up to Mother’s Day.

Best Month Ever! garnered positive feedback and commentary during its PAX East 2022 Boston in-person presentation, and recently racked up well over 3 million views on TikTok. Furthermore, Klabater is currently in talks with partners on how to better showcase mature, engaging stories and empowered female characters like Louise – stayed tuned learn more!

Best Month Ever! is available on PC (with OST added!), Xbox One, Xbox Series X|S and Nintendo Switch at $19.99, EUR 19.99 and regional equivalents. PC and Xbox players can count on a 15% launch week discount! PlayStation 4 & 5 version coming soon! 👩‍👦 What Does It Take To Be A Mother?

Telling good from bad was never easy, all the less when you’re a single mum in her late 20s with a clever 8-year-old under your care.

Lives can be changed for good in a split second – your choices at crucial moments influence what kind of person Mitch becomes and what values guide him once he becomes his own man. Find clues as to why Louise’s life is what it is today, take hard decisions no other person would be strong enough to stomach, and show Mitch what he needs to see in order for him to become independent, suave, and brave enough to conquer adulthood. Your decisions REALLY matter! To keep track of Mitch’s growth as a person, each choice you make adds positive or negative points to three key statistics: Righteousness, Confidence, and Relations. These influence which type of ending Mitch will reach at the end of the game – there are 9 unique endings in total! 🗺️ Everybody Has Their Story

The 1960s were tumultuous in more ways than one – the Summer of Love, the Vietnam War, the survivors and the losers of the great upheaval in history.

Canned Heat was “Going Up the Country” while Bob Dylan asked “How does it feel” to have no home and live on the street.

Travel across America and meet a plethora of characters that may help or hinder Louise as she struggles to achieve her goals – including the most controversial groups many thought long gone.