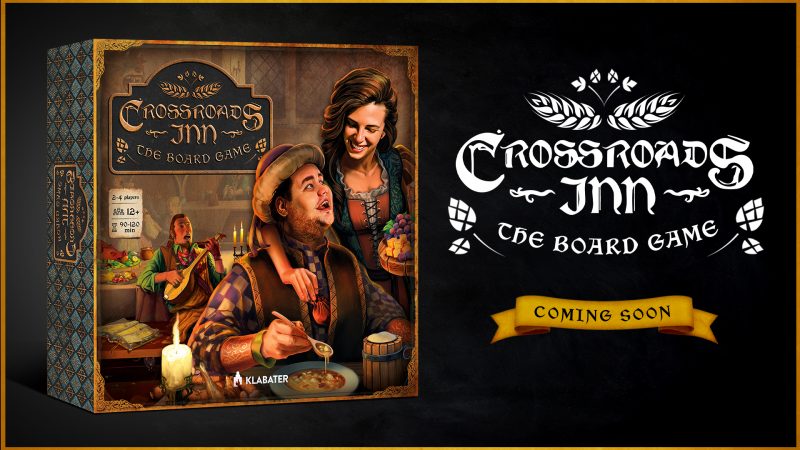 WARSAW – June 18, 2021 – Crossroads Inn, Klabater’s best-selling game (PC, Xbox One / Series X), sets off to conquer the board game market. The creators plan a crowdfunding campaign in the second half of the year.

Crossroads Inn: The Board Game is a strategic and economic board game that, like its digital original, will allow players to manage the development of their inn. The game takes place in the kingdom of Yorevale, where – absolutely accidentally – monarchs keep dying, and their illegitimate children have to compete with each other for influence and power. Players will take on the roles of royal bastards and try to take over the crown. To avoid a bloody civil war, a deal is made, and an honorable bet is born: whoever builds the best inn will become not only the “king” of local gastronomy but also the king of all of Yorevale! So put on aprons and chef’s hats, grab a spatula – and get to work!

The original Crossroads Inn game debuted on PC on October 23, 2019, and within hours of its release, the game climbed to 3rd place of the global bestsellers, selling over 100,000 copies, including the season pass and DLCs. On May 19, 2021, the game was also released on Xbox One and Series X consoles.

In line with the latest market trends, Klabater plans to launch a crowdfunding campaign in the second half of the year. Crowdfunding websites such as Kickstarter and Gamefound specialize in founding board games, which is confirmed by the fantastic results of many campaigns of games from this genre in recent months.

“The board game market is currently experiencing an amazing boom all over the world. An element of this phenomenon is also the production of board games based on hits known to fans from PC and consoles. Many of them are very successful on crowdfunding sites, such as tabletop adaptations of The Witcher or Frostpunk.” – says Michał Gembicki, Joint-CEO at Klabater. “Crossroads Inn is a strong fantasy brand that also offers a good dose of humor. I think it’s a great starting point for a fine board game.”

Have a look at the roadmap of the upcoming activities related to the Crossroads Inn tabletop edition: In Crossroads Inn: The Board Game players will build an inn from scratch and prepare unique meals, all to meet the expectations of guests from various social classes. It doesn’t matter if it’s simple and folksy Distressed or sublime and capricious representatives of the nobility – everyone wants to drink and eat well. The gameplay will be based on predicting – and blocking! – the actions of the rest of the bastard siblings who run the competing taverns. The one who unscrupulously uses the gold, rumors, and weaknesses of their opponents, will win. There is room for many innkeepers in the kingdom… but there can be only one king!

Crossroads Inn: The Board Game offers many ways of achieving this goal. Buying new furniture, getting unique recipes and ingredients for dishes, well-trained employees – everything can help the player achieve the final victory. And if that’s not enough, seductive Vedetas and silver-tongued bards will take care of the needs of even the most demanding guests.

Crossroads Inn: The Board Game is: