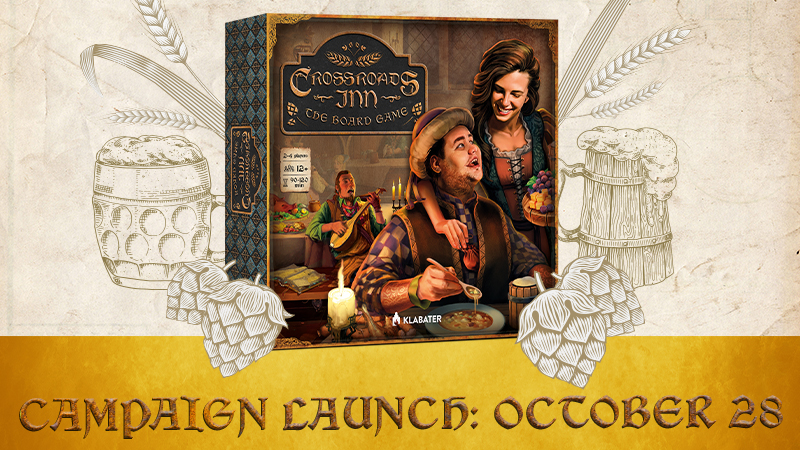 WARSAW – October 19, 2021 – Crossroads Inn: The Board Game crowdfunding campaign will be launched in October. Klabater’s best-selling game (PC, Xbox One / Series X), sets off to conquer the board game market.

Visit Crossroads Inn: The Board Game preview site and follow the campaign by simply clicking 💚

Following the steps of the PC original, Crossroads Inn: The Board Game is a strategic and economic board game that will allow players to manage the develop their fantasy inn. The game takes place in the kingdom of Yorevale, where – absolutely accidentally – monarchs keep dying, and their illegitimate children have to compete with each other for influence and power. Players will take on the roles of royal bastards and try to take over the crown. To avoid a bloody civil war, a deal is made, and an honorable bet is born: whoever builds the best inn will become not only the “king” of local gastronomy but also the king of all of Yorevale! So put on aprons and chef’s hats, grab a spatula – and get to work!

From PC straight onto the tabletops!

The original Crossroads Inn game debuted on PC on October 23, 2019, and within hours of its release, the game climbed to 3rd place of the global bestsellers, selling over 100,000 copies, including the season pass and DLCs. On May 19, 2021, the game was also released on Xbox One and Series X consoles. 🍺 Two dishes on one plate – become the “king” of gastronomy, and at the same time… the king of Yorevale!

🍺 Five different social classes of guests whose favor the players must win. Distressed, Outlaws, Travellers, Townsfolk, and Nobles – each class prefers a different type of food and interior design!

🍺 “Prestige track”, or the way to one’s heart is through their stomach – a unique mechanic that allows you to win the game with fame and prestige points.

🍺 A system of spreading negative rumors about the competition. Decide whether to slander other players politically, economically, or perhaps with the help of rumors from the Yorevale travel routes.

🍺 A unique fantasy world from the original PC game – but served with ‘a pinch of salt.’

🍺 Hire and fire employees; plague your opponents with an arsenal of dirty tricks.

Anyone visiting the campaign website can download the beautiful Crossroads Inn digital cookbook for free, whether they support the campaign or not.

Media & Content Creators: If you are interested in receiving the TTS digital version or printed edition of the game, please let me know! There are also few printed versions available!

Read the project details and sign up for the newsletter at: www.crossroadsinngame.com/board-game